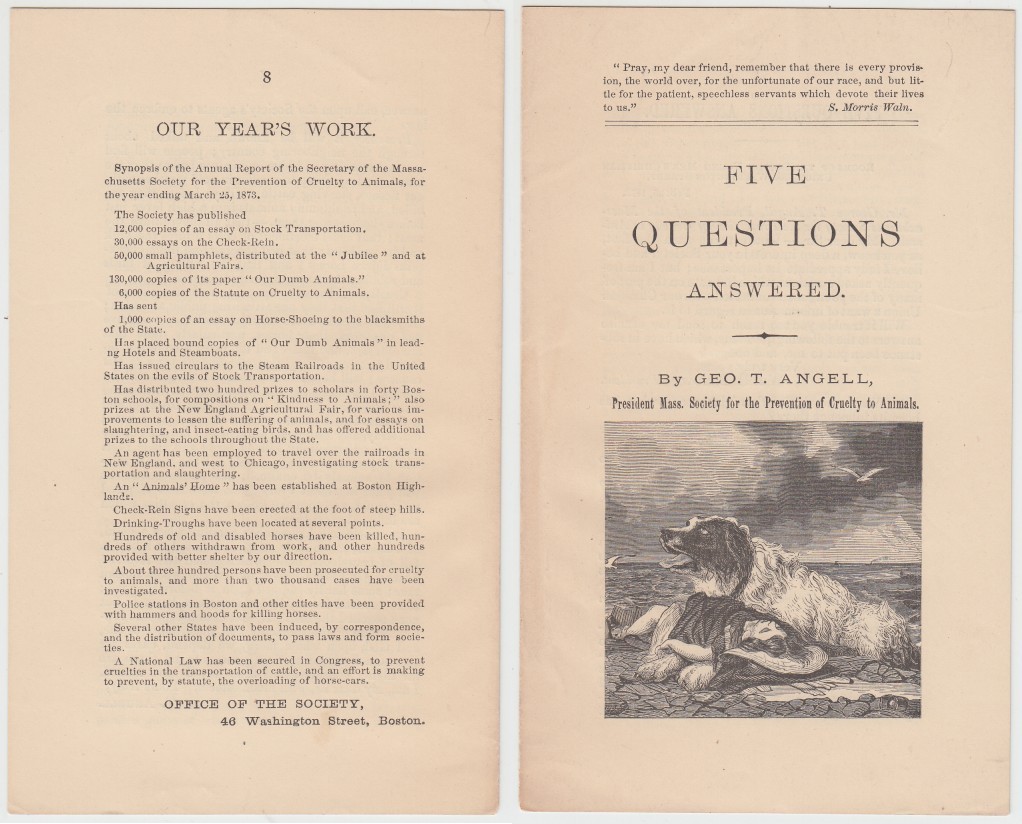 George Thorndike Angell (June 5, 1823 - March 16, 1909) was an American lawyer, philanthropist, and advocate for the humane treatment of animals. While attending horse races in 1866 he witnessed two horses being run to death. Motivated by this incident and inspired by the work of Henry Bergh in New York, his advocacy for the humane treatment of animals became a lifelong passion. In 1868 he founded and became president of the Massachusetts Society for the Prevention of Cruelty to Animals, in the same year establishing and becoming editor of 'Our Dumb Animals', a journal for the promotion of organized effort in securing the humane treatment of animals. For many years he was active in the organization of humane societies in England and America. In 1882, the Rev. Thomas Timmins and he initiated the movement for the establishment of Bands of Mercy (for the promotion of humane treatment of animals), of which in 1908 there were more than 72,000 in active existence. In 1889 he founded and became president of the American Humane Education Society. This hand-sewn 147+ year old pamphlet is part of that educational outreach. It was written to assist Mr. Angell in explaining why laws needed to be passed to assure proper animal welfare. This handout was a response from Angell to answer questions posed to him by Wm. H. Baldwin, President of the Boston Young Men's Christian Union, because the gentleman who were staying there at the time were asking him. The five questions are: 1. Where did this work originate, and what has been its influence there? 2. Is it not more important to form societies for the protection of men than animals? 3. Why not leave the laws relating to animals to be enforced like other laws by the ordinary police? 4. Why should animals receive special protection? 5. How can existing evils in this respect be remedied? It is in beautiful near new condition with one tiny spot on the rear page. 8 page handout published in Boston, 1873. Frt cover is decorated with a repro of a classic work of art showing a large long haired rescue dog with a small girl laying over his front legs because he just swam the rough water that shows behind them and the dark clouds looming. There are no other illustrations. An exceedingly rare offering for the collector of animal welfare ephemera, folks interested in Massachusetts history, or the Black Beauty aficionado. Remember that Anna Sewell wrote Black Beauty not as a bedtime tale for children, she was trying to educate the people of England on the wrongful treatment of London carriage and cart horses that she witnessed daily during her own cart outings. Her biggest charge was the improper use of the check rein on a horse's bridle harness. Black Beauty wa a catalyst to the birth of the ASPCA with the help of 'angels' like George T. Angell.

Publisher: Boston, The Massachusetts Society For the Prevention of Cruelty to Animals.: 1873