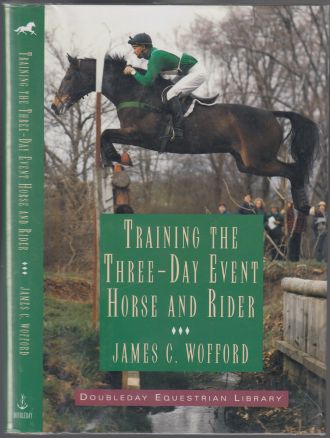 Brand new copy in new dj. Signed by Jim Wofford on title page. 257 pp. Using the same down-to-earth style that has made his eventing clinics so popular, Wofford uses his book to instruct you on what to look for when selecting a mount to compete in the three-day event, and shares his thoughts on the usefulness of various equipment and tack. He then goes on to give a detailed explanation of how to train for the three segments of competition: Dressage, Cross Country, and Show Jumping. Conditioning, of course, is of the utmost importance in this sport. Wofford conditioning program and his advice on competitive strategy will insure that you and your horse have plenty of stamina going into the final phase. James C. Wofford was a key member of the U.S. Equestrian Team's three-day event squad for two decades, during which time he was named to four Olympic teams, winning two team silver medals and four national championships. In addition, he was the individual silver medalist at the 1980 Alternate Olympics at Fontainebleau, France, and the individual bronze medalist at the 1970 World Championships at Punchestown, Ireland. Now based in Upperville, VA, he as been training three-day event competitors for twenty-five years.