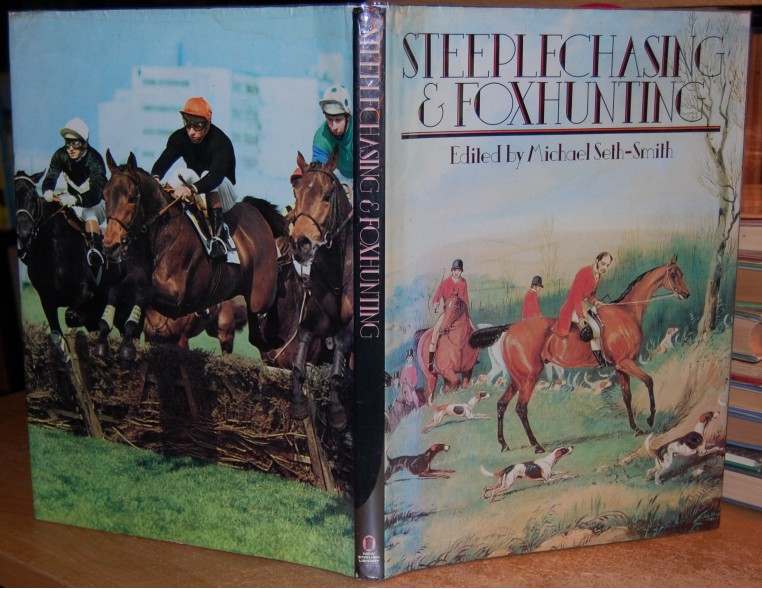 First edition folio hardcover in black buckram covered boards measuring 13 1/2" x 9 3/4" 128 pages without names, tears or soil. Boards show bumped tips and spine ends but no rubbing. Full color illustrated DJ in new mylar shows slight curl and is a bit tatty at head of rear panel, but is complete and displays well with color foxhunting reproduction on front and color racing photo on rear panel. Absolutely filled with stunning full and double-page color plates, this coffee table masterpiece is sure to take first place on the stack! In two centuries Steeplechasing and Fox Hunting became part of the British sporting heritage - and that of many other countries. Steeplechasing began in the thrilling cross-country races held in Ireland in the mid-eighteenth century. In England it caught on slowly, until the first important race in 1830. Then the sport quickly became popular, and produced world famous races such as the Cheltenham Gold Cup and The Grand National. Foxhunting preceded steeplechasing and, in the early days, was considered the 'better' sport. Noblemen had often hunted deer, but the extravagant and dashing young men of the Georgian era sought a more demanding and dangerous sport and started hunting the fox, which ran faster and longer in front of hounds. Foxhunting attracted, as it still does, colourful personalities such as Jack Mytton, who terrified guests by riding his tame bear in the drawing-room, and George Osbaldeston - the squire of England - who, apart from being a great Master of Hounds, was cricketeer, orsman, a fine shot and a champion of real tennis. Sporting prints by Henry Alken and the Herrings, humorous cartoons by Norman Thelwell, and vivid paintings by Lionel Edwards as well as photos of recent races and meets all show the fun and excitement of racing and hunting and provide superb illustrations to the text.