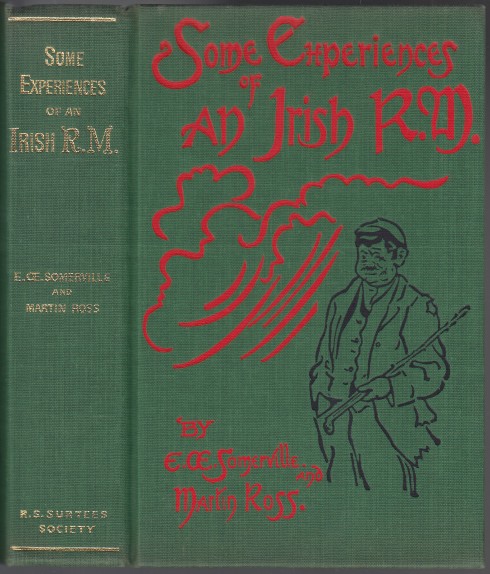 Some Experiences of an Irish R.M.

Gift quality first printing of the R. S. Surtees Society publication 1983. Lovely, straight, sharp hardcover in pine green cloth covered boards with bright gilt spine title, bright red cover titles and black line drawing of the 'R.M.', a man that resembles Walter Matthau on the front board, and a line drawing of a large hound laying down on the rear board. 309 pp which also has a list of Surtees Society members in the rear as well as other offerings from the publisher. 12 stories in this volume. As the straightman narrator, observer, and regular butt of hundreds of hilarious trials and mishaps, Major Sinclair Yeates never ceases to be surprised, is usually not amused, and can't stop himself from loving his Irish neighbors. Major Yeates leaves England to work as an Irish Resident Magistrate convinced that two and two make four. But as he passes judgment on a range of cases and characters that would have driven Solomon to drink he learns that in Ireland, two and two are just as likely to make five, or three, or even nothing at all... Edith Somerville and Martin Ross were second cousins born to distant branches of a prominent Anglo-Irish Ascendancy family. They lived together at the Somerville home for most of their adult lives, traveling frequently to Europe and collaborating on numerous books and articles. Their most famous novel, The Real Charlotte, was published in 1894. After Ross's death in 1915, Somerville continued to write and publish under both names, claiming that the partnership endured beyond the grave.

Title: Some Experiences of an Irish R.M.

Some Experiences of an Irish R.M.