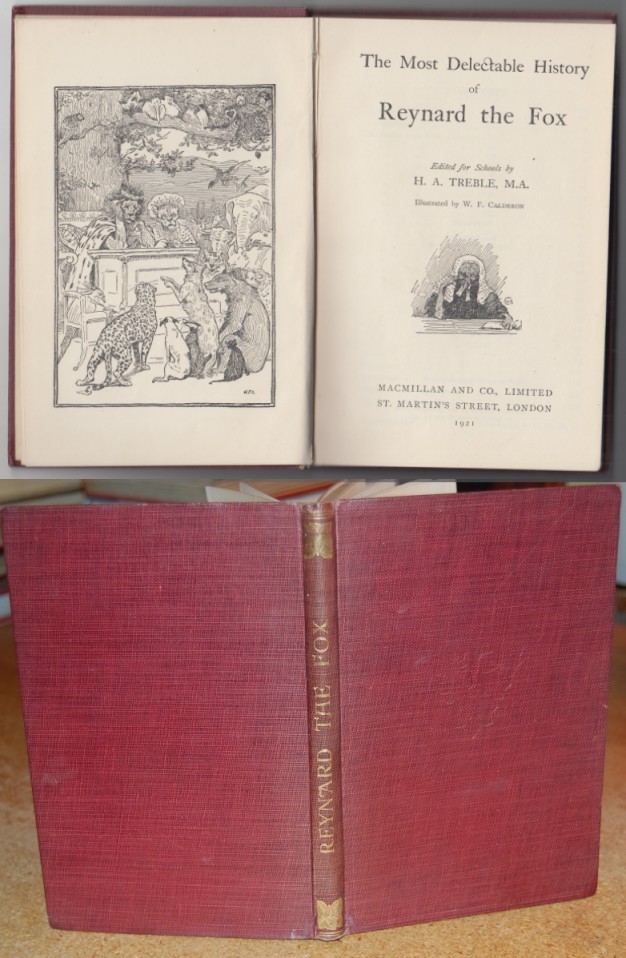 The Most Delectable History of Reynard the Fox

Gift quality hardcover in burgundy cloth covered boards with bright gilt spine title. Gorgeous slim book with sharp tips and spine ends, and five grape leaves embossed on front cover. No names, tears or soil inside the 117 pp text . Includes study notes, a glossary, passages for repetition and helps to further study in rear followed by two pages of other offerings in this English Literature Series for Schools (General Editor J. H. Fowler, M.A). Four very faint oval stamps within, two on frt pastedowns and two on endpapers are all that keep it from being as new. Illustrated with 6 full page black & white line drawings by W. F. Calderon. Reynard The Fox is not, in its origin, a story invented and written by some one man whom we call its author. It belongs to "folk-lore" . It is a fable of yesteryear that was passed down from generation to generation with little bits added over time. When it was first written down we do not know. But the earliest version was in Latin, and was probably written in the tenth century. Later came versions in French and in Flemish, in verse and in prose. At last, near the end of the fifteenth century, came a version in English prose, one of the first books to be printed in England - at Caxton's famous press in Westminster. Has the fable any hidden meaning? It is a political or religious satire, making fun - like Gulliver's Travels - of statesmen or lawyers or priests and monks? Not in its origin. It arose, as so many stories do, out of the pure love of 'supposing' which is natural to humans. But into the written versions of the middle ages a hidden meaning began to creep: little satirical turns were given by the writers, little episodes inserted with a side glance at solemn customs and institutions of the day. And when the reformers of the sixteenth century made their attacks on the abuses of the Church of Rome, we cannot wonder that they hailed in Reynard the Fox a fable in which they could show, reflected as in a mirror, the craft and cunning of monks and ecclesiastical courts and lawyers. Indeed, the frontispiece shows a lion and lioness as a pair of judges behind 'the bench'. His Honor: Pappa lion in a robe and crown, the lioness is at his left side wearing what could be described as a swimming or shower cap. The second illustration shows Reynard in a long white monks robe with his rosary in hand while he chats up a dressed rooster in a barn yard. This fable might be put on as a play for some adventurous teacher as there is a cast of characters in the front. Not set up as a script but is still easy to read and follow.

Title: The Most Delectable History of Reynard the Fox

Author Name: Treble, H. A., M.A. Edited for Schools by

The Most Delectable History of Reynard the Fox