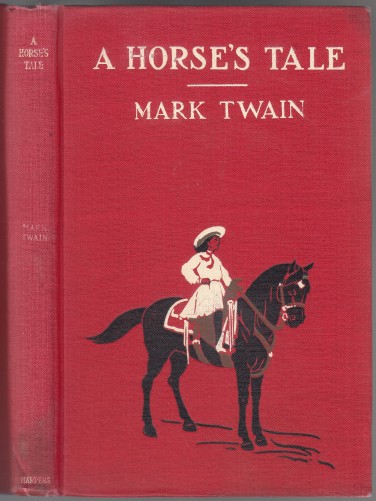 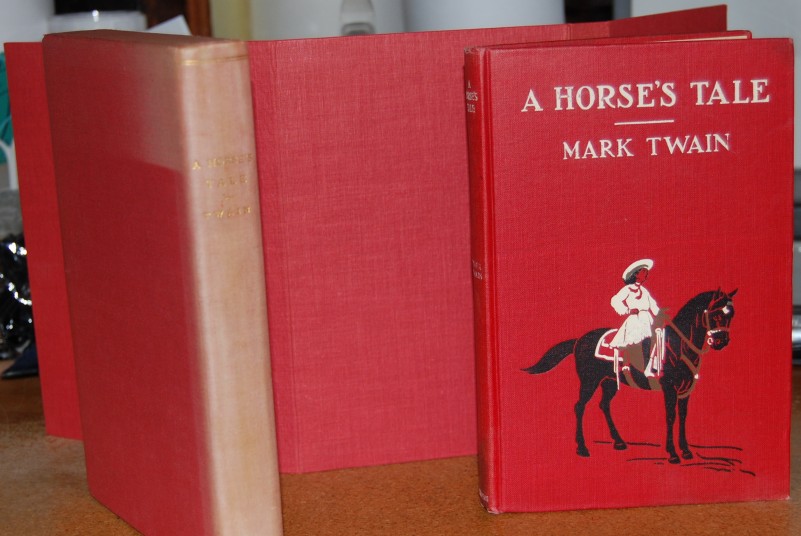 First edition blindstamped illustrated hardcover in rich red cloth with black horse and white/black/brown rider in a dress riding him. Upper tip of frt board, and lower tip of rear board slightly darker than rest of cloth. Spine ends bumped with one micro break in the cloth at head just starting, and trace of color loss on remaining still sharp tips. A touch of paint loss on the HOR in the word Horse's on frt board. Antique Brentanos bookstore sticker at foot of rear pastedn. No names, tears or soil in the 153 pp text. Tissue-guarded frontis and four other illustrations. Comes in a custom-made red cloth slipcase with gilt title on sunned spine; lettering on spine still quite legible. Clamshell with red ribbon pull is like new. This American classic has been extremely well cared for and is in remarkable condition. A Horses Tale is partially told in 'first horse person' and was originally published in two installments by Harpers Magazine in 1906. Clemens's own daughter, Susy, who died in 1896 at the age of 24 from meningitis, is the inspiration for the main character Cathy Alison. This is the tale of Buffalo Bill's fictional favorite scout horse (Soldier Boy), who befriends an orphan girl whom he saves from wolves. He is stolen and ends up gored in a bullfight ring; she rushes to his side and is fatally gored herself. Excerpt -'Soldier Boy - Privately to himself' I am Buffalo Bill's horse. I have spent my life under his saddle - with him in it, too, and he is good for two hundred pounds, without his clothes; and there is no telling how much he does weigh when he is out on the war-path and has his batteries belted on. He is over six feet, is young, hasn't an ounce of waste flesh, is straight, graceful, springy in his motions, quick as a cat, and has a handsome face, and black hair dangling down on his shoulders, and is beautiful to look at; and nobody is braver than he is, and nobody is stronger, except myself.