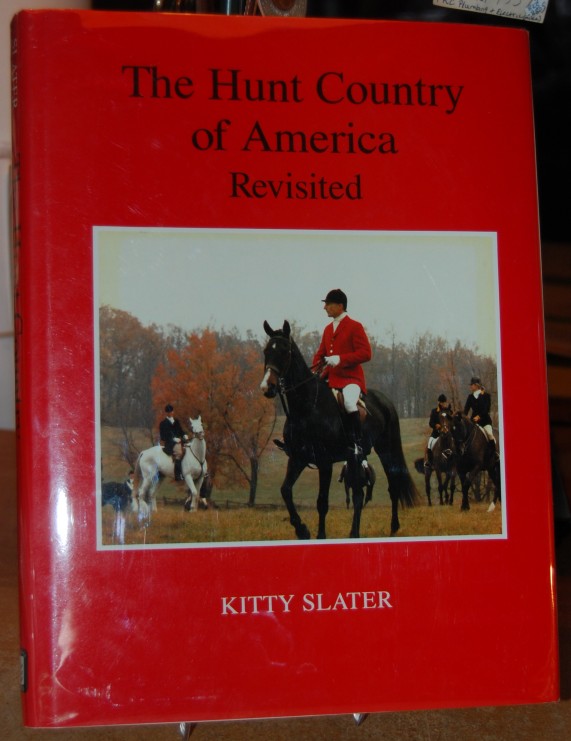 The Hunt Country of America Revisited

Gorgeous first edition hardcover in glossy black paper covered boards with sharp tips and head of spine, spine foot bumped but no broken paper. Measures 12.25" x 9 .5" x 1" , 264 pp text is crisp, tight and unmarked and has several sections of glossy color photos. ISBN: 084534773X. Will require additional funds for priority mail or international destinations. A full circle to the work that Kitty began in 1967 when she wrote 'The Hunt Country of America' which sold out in four months. Profusely illustrated with color and black & white photography, this volume has delineated, expanded, and further developed the descriptive, historical, enchanting Hunt Country story through the later part of the '80s. Although foxhunting has been, and is the rod and staff of this unique area of America, featured also in this fourth special limited edition are other Virginia Hunt country Equine Sports: Coaching, Driving, Eventing, Grand Prix classics, The Horse Show new division featuring side saddle exhibitions and Beagling as a prelude to children foxhunting. Race horse fanciers will particularly enjoy the chapter depicting Virginia as the cradle of the American thoroughbred. It also points out contributions to the world of thoroughbred racing and breeding, including their owners, riders and other individuals prominent in equine sport. The book includes histories of the Piedmont and the Orange County Hunts, and of the important towns and countries of The Hunt Country, as well as myriad stories of the many people who have made The Hunt Country famous. The celebrated sportsmen and women who appear in these pages have all been personally known by the author. There are Harry Worcester Smith, Dan Sands, Fletcher Harper (the "dean" of American foxunting), Tommy Smith, and Liz Tippett, who, at her famous estate Llangollen, entertained a multitude of guests, from Prince Aly Khan to jockey Eddie Arcaro. In addition to the personalities, Slater reveals the countryside that has provided, and continues to provide, the background for their hunting and for the homes in which they reside. We are told not only of the fabulous Llangollen, but of Glen Ora, which President Kennedy used as weekend retreat: of Huntland, which President Lyndon Johnson often visited when he was vice-president; and Waveland, where descendants of George Washington lived after they left Mount Vernon. Virginia's modern hunting era began in 1905, when it was selected as the site of the International Foxhound Trials between two choice American and English packs. In Colonial times, Thomas, the sixth Lord Fairfax, came to America to oversee his several-million-acre estate, designated the Northern Neck of Virginia. It was he who set up the first pack of foxhounds in Virginia in the English manner. George Washington became an avid foxhunter after frequently visiting Lord Fairfax, who introduced him to the sport. Since then, there have been several American presidents who have spent time in The Hunt Country. Race-horse fanciers will particularly enjoy the last chapter, which depicts Virginia as the cradle of the American Thoroughbred, and which shows the contributions to the world of Thoroughbred racing and breeding made by the Hunt Country itself. This chapter also gives a description of some of the horses, trainers, jockeys, and owners who are prominent in this field.

The Hunt Country of America Revisited