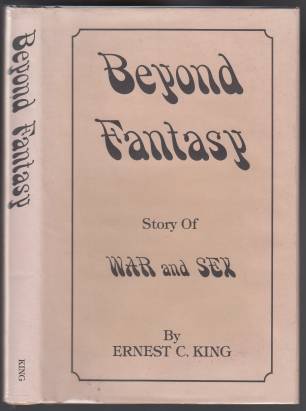 Beyond Fantasy Story of War and Sex SIGNED

Signed 1st edition hardcover in beige cloth boards with sharp tips and spine ends, black titles on cover & backstrip. Matching unclipped dj in new mylar shows light sunning along backstrip, and very faint soil spot on foot of frt panel. No chips or tears, displays very well. Internally as new save for light foxing on edge of page block and author's presentation and signature on fep. An exceedingly rare book of World War II exploits of a young man from an average American family and a small town who enlisted in the United States Air Force Army and trained, loved and fought his way through World War II. It carries you through his training, love affairs, combat and the downing of his plane; his evading of the Germans for nine months, eventual capture, and his tenure as a civilian prisoner of the Gestapo for two months and twenty-five days. It includes parts of a day-to-day diary that describe his nine months in a prisoner-of-war camp and a forces march of 80 days covering 460 miles. Events related herein are substantiated by documents from the Adjutant General's Office of the War Department and other sources.

Title: Beyond Fantasy Story of War and Sex SIGNED

Beyond Fantasy Story of War and Sex SIGNED